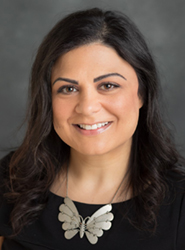 Revital Ganzi is a native Hebrew speaker and was born and raised in Tel Aviv, Israel. She is an experienced instructor with a demonstrated history of working in the primary, secondary and higher education industry. Revital is a graduate of the College of Management in Israel, and holds an M.A.T. in Education and Jewish leadership focusing on Hebrew language Instruction from Brandeis University, MA.

Relocated from Boston, MA, returning to Knoxville, TN. Along with her work as Modern Hebrew lecturer, she also works as a Hebrew Instruction Consultant at the Stanford Eisenberg Knoxville Jewish Day School. Revital is also a DML-Doctorate in Modern Languages candidate in Hebrew as a second language in a Hybrid program through Middlebury College, Vermont, and  taught in their summer Hebrew Immersion Program. She has experience in an online teaching as a Hebrew Instructor and e-mentor for the United States Air Force and private groups. Since she moved back Revital also joined Hadassah Knoxville board as the Education VP, teaching about modern Israel.

While in Massachusetts, Revital was employed at several Greater Boston institutions and organizations such as Hebrew College, and also worked as a TA at Brandeis University while attaining her graduate degree. Before moving to Boston, she worked in Knoxville as a Hebrew Tutor in the Taped Language Program at the University of Tennessee, and as a Hebrew teacher at the Stanford Eisenberg Knoxville Jewish Day School.

The flagship campus of the University of Tennessee System and partner in the Tennessee Transfer Pathway .